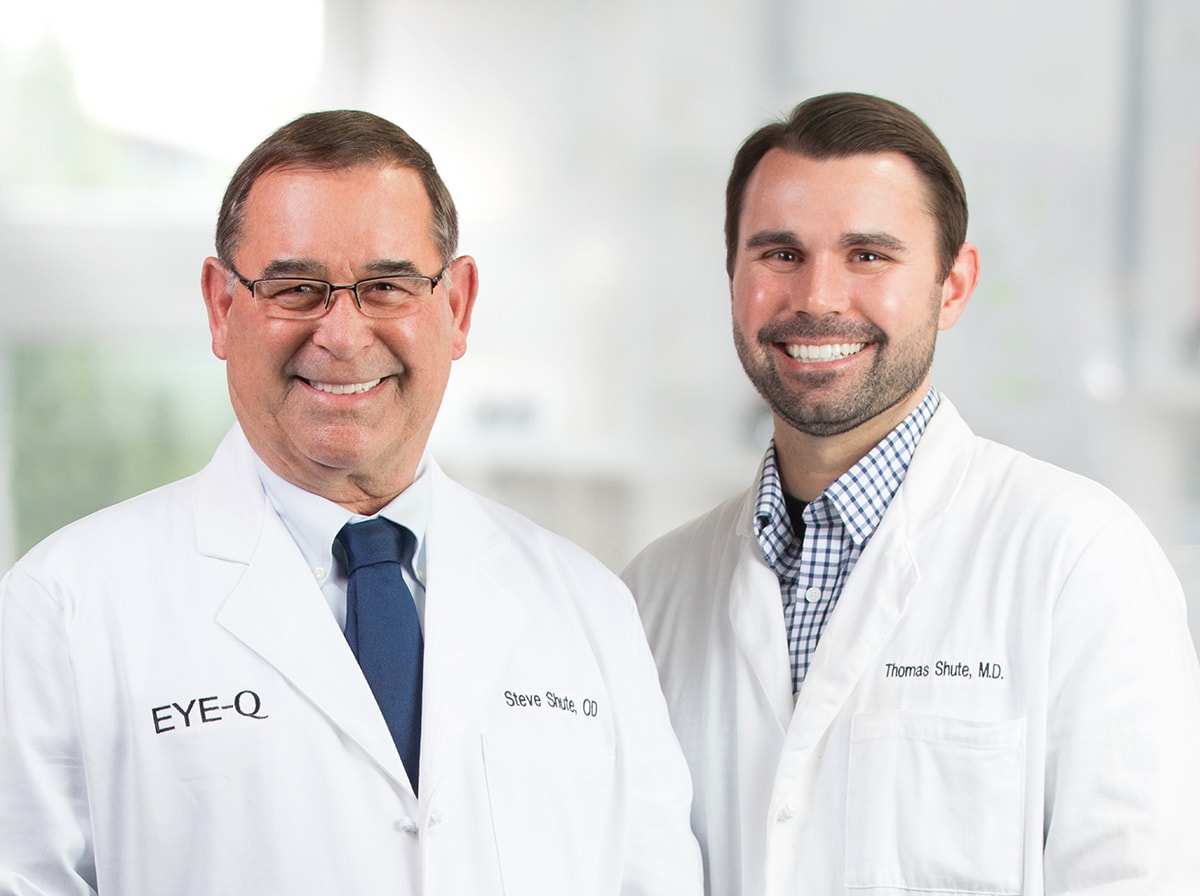 If you walk into EYE-Q and ask for Dr. Shute, you may need to clarify. We’re fortunate to have two Shutes on our team—Dr. Steven Shute, father and optometrist, and Dr. Thomas Shute, son and ophthalmologist. Both are committed to providing the highest quality of eye care to the Central Valley, upholding a legacy that has been in this community since the 1920s. Four generations of Shutes have served the area in eye care for nearly a century, and the traditions continue to this day.

Sidney F. Shute was a school teacher in Tranquility for 20 years, but after retirement, he headed to the Los Angeles College of Optometry in search of a new challenge. He returned to the Central Valley after graduation in 1926, establishing his own optometry practice in Fresno.

Sidney A. Shute originally attended Fresno State but left to fight in World War II, becoming a US Marine Corps dive-bomber pilot at Guadalcanal. After the war, he attended the Berkeley School of Optometry and graduated in 1947. He opened his optometry practice in Clovis the same year. He was likely drawn to the profession by his father, but his personal passion was evident as he built a successful practice over the next few decades.

Steven Shute spent his childhood at that very optometry practice, playing as a child and sometimes helping out as he grew older. It wasn’t until the summer after his sophomore year of high school, however—while young Steven was working at Wawona Packing Co., feeling every degree of the summer heat and thinking longingly of his father’s air-conditioned office—when he decided to become an optometrist.

After graduating from Bullard High School in Fresno, Steven followed in his father’s footsteps and joined the US Marine Corps Reserves, spending six years in radio communication. He then attended Fresno City College and went on to graduate from the Pacific University College of Optometry. He joined his father’s practice in 1974 and worked with him for eight years before taking over the practice upon his father’s retirement.

Thomas Shute spent his childhood surrounded by eyeballs, in his father’s words. He spent a lot of time in the office as well, though the elder Dr. Shute claims he never encouraged his son to pursue any specific career or field of medicine. Thomas graduated from San Joaquin Memorial High School and then spent two years at Fresno City. He earned Bachelor of Science and Master of Science degrees from the University of California, San Diego, and after completing medical training at the UC San Diego School of Medicine, where he naturally gravitated toward ophthalmology.

Dr. Shute completed his internship at Travis Air Force Base, then served four years as a U.S. Air Force flight surgeon before completing his ophthalmology residency and fellowship training at Washington University in St. Louis. Ultimately, he was still compelled to return to the Central Valley, continuing the Shute family legacy. Dr. Shute offers the full complement of micro-invasive glaucoma treatment techniques, in addition to traditional glaucoma surgeries. His practice also focuses on the surgical management of cataracts, utilizing the most advanced methods and intraocular lens implants available today.

The Shute family is dedicated to serving the community that has served them so well for decades. Both the elder and younger Shutes honor the tradition of their ancestors by providing the highest quality of eye care and building trusting relationships with their patients. EYE-Q is privileged to have two expert doctors in our organization who reflect our values and maintain strong ties to the community we love.